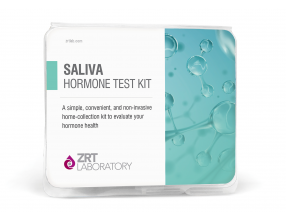 ZRT Laboratory now offers a comprehensive LC-MS/MS saliva assay that measures the levels of 18 endogenous steroid hormones including estrogens, progestogens, androgens, glucocorticoids, and mineralocorticoids. In addition to endogenous hormones, the new assay quantifies the level of melatonin and the synthetic estrogen ethinyl estradiol, present in most birth control formulations, as well as several synthetic aromatase inhibitors (anastrozole and letrozole) and the 5α-reductase inhibitor finasteride.

The LC-MS/MS assay expands beyond the 5-steroid panel of parent hormones (estradiol, progesterone, testosterone, DHEAS, and cortisol) currently tested by immunoassay (IA) at ZRT Laboratory. Testing the levels of both upstream precursors and downstream metabolites of these parent active steroids, listed above and shown in the diagram on the next page, will help determine which steroid synthesis enzymes are low, overactive, blocked by natural or pharmaceutical inhibitors, or defective due to metabolic dysfunctions (e.g., Polycystic Ovarian Syndrome (PCOS), Premenstrual Dysphoric Disorder (PMDD), luteal dysfunction, overexpression of aromatase, and estrogen dominance) and inborn errors of metabolism such as Congenital Adrenal Hyperplasia (CAH)

These include the endogenous estrogens estradiol, estrone, and estriol, plus the synthetic estrogen ethinyl estradiol (EE). Estradiol is the most potent of the endogenous estrogens, being 5 and 10 times more potent than estrone and estriol, respectively, in its activation of cellular estrogen receptors. EE, a synthetic steroid present in most oral steroidal birth control formulations, is a highly potent estrogen mimetic that is about 2x more potent than estradiol in activating cellular estrogen receptors, which is why only very low concentrations are needed for it
to elicit profound potentially adverse hyper-estrogenic effects. Additionally, EE induces lower ovarian synthesis and bioavailability of endogenous estradiol,