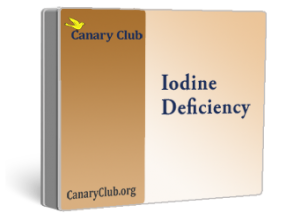 Up to 10% of the population in the U.S. has iodine deficiency. Iodine is essential in healthy thyroid hormone production, brain function, breast tissue, fetal development and more.

Approximately 2 billion of the world’s population is iodine deficient. According to the most recent NHANES surveys, urinary iodine levels have dropped in the U.S. by half since the 1970s, and nearly 10% of the population has some degree of iodine deficiency. Iodine deficiency is resurfacing in developed countries like the U.S. and Western Europe as efforts are made to reduce the consumption of iodine-containing salt and foods (eggs and dairy) to lower blood pressure and blood lipids.

Adequate Iodine is Essential at All Stages of Life

In the developing fetus, an adequate iodine supply from the mother is essential for thyroid hormone production, which is vital for proper neurological development. In those areas of the world with severe iodine deficiency, pregnant women are at increased risk of miscarriage, stillbirths, or giving birth to children with cretinism and severe neurological and developmental defects. Even in areas of the world with mild to moderate iodine deficiency, which includes some regions of the U.S., children born to mothers who are iodine deficient during pregnancy can have impaired intellectual development8 and are at increased risk for developing attention deficit and hyperactivity disorders.

In children and adults, iodine deficiency can lead to lower thyroid hormone synthesis and consequent symptoms and conditions of hypothyroidism. When iodine levels drop below a critical threshold, consequent low thyroid hormone levels signal the brain to increase TSH production. Excessive stimulation of the thyroid gland by TSH, caused by iodine deficiency, leads to overgrowth (goiter) in an effort to maintain steady-state thyroid hormone synthesis. Areas of the world with low iodine usually have a much higher incidence of goiter.

High iodine levels, resulting from consumption of high iodine containing foods (e.g., seaweed) or iodine medications or supplements, can also disrupt normal thyroid function, causing goiter and both hyperthyroidism or hypothyroidism. Hyperthyroidism is more likely to occur in the elderly who have been exposed acutely to high iodine after living for years in a low iodine environment.

Chronic low iodine can lead to the development of autonomous thyroid nodules that produce excessive amounts of thyroid hormones (hyperthyroidism) when acutely exposed to high levels of iodine. Although rare, hyperthyroidism and associated thyrotoxicosis caused by excessive iodine consumption can cause arrhythmias and precipitate adverse cardiovascular events.

How Much Iodine Is Needed for Optimal Thyroid Health?

Maintaining optimal iodine levels through consumption of iodine containing foods, salt, or supplements is essential for optimal thyroid hormone production. The World Health Organization (WHO), Centers for Disease Control (CDC), and other international organizations that study iodine nutritional status of world populations, unanimously agree and recommend, for non-pregnant adults, consumption of 150 μg of iodine daily for optimal thyroid function and have set 1,100 μg as the upper level of tolerance.

In Japan, where a much higher amount of iodine is consumed in the form of seaweed and fish, the Japanese Ministry of Health has set the upper limit at 3,000 μg.

The higher iodine levels found to be breast-protective are more consistent with the amounts of iodine consumed in countries like Japan, where breast cancer rate is only about one-fifth that of the U.S., and other countries with much lower iodine consumption.

While iodine’s role in thyroid hormone synthesis is well recognized, its other and equally important roles in maintaining health are less well appreciated, but well researched. Iodine serves many different and protective roles in the body including those of an antioxidant, antimicrobial, anti-proliferative, and anti-carcinogen.

Iodine’s ability to form iodolipids also underlies its capacity to serve as an antiproliferative and prevent abnormal benign growths (e.g., thyroid nodules, fibrocystic breasts, uterine fibroids) as well as cancers of these and other tissues (listed above).

Iodine’s effectiveness as an antimicrobial has been know for over a hundred years as it has been used for preoperative surgical skin preparation to prevent infection. As an antimicrobial, it is of relevance that iodine from the bloodstream concentrates in a broad spectrum of tissues that are repeatedly exposed to infectious organisms (e.g., skin, eyes, gastrointestinal tract, salivary gland, nasal tissue, breast ducts, uterine lining, and prostate).

With iodine playing so many different roles in optimizing health and preventing disease in the thyroid and other tissues, it is essential that adequate iodine intake is maintained and problems associated with low or excessive iodine intake are identified and treated appropriately.

To this end, ZRT has developed a simple and convenient test to measure an individual’s iodine level in urine dried on a filter strip. This method was developed to circumvent the more cumbersome collection of all urine over a 24 hour period.

Iodine is collected twice during the day (first morning and last night void) on filter strips either by dipping the strip in urine collected in a cup, or by urinating directly on the strip. The urine-saturated filter strips are allowed to dry overnight and then sent to the laboratory for iodine and creatinine testing.

To get a thorough assessment of your iodine levels and its effect on thyroid function, see this test:
Comprehensive Elements + Thyroid + Iodine