Reduced hormone levels due to natural aging can affect men, too! 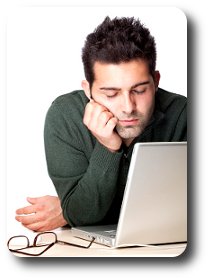 Sometimes referred to as "male menopause," andropause is the age-related decline in a man's testosterone levels.

These declines can cause some unwelcome changes just as menopause can. In a recent article, Candace Burch, M.A.Hormone Educator, said:

"And there is little doubt that when muscles morph into body fat and sexual fizz fizzles out men may worry that they are becoming less than human. But the red convertible, younger gal pal, and Viagra won’t bring back the man they were if an unhealthy lifestyle and hidden hormone imbalance go unaddressed. Fact is, Low-T or any measurable deficiency of testosterone generally goes along with deficient DHEA and undetected  imbalances of related hormones"

Compared to menopause, there’s no question that testosterone is the hormone that puts the macho in male: that virility, hairiness, heavier bone and muscle mass, deeper voice and aggressive competitive drive we associate with the male of the species. andropause is a much more gradual process with men having declines in testosterone of about 1 percent a year after age 30 which can sometimes reach half of the normal levels by age 70.   By age 45-50, though, testosterone can already be at deficiency levels which are regarded as levels below 350 nanograms per deciliter (450-900 ng/dl are optimal).

Northwestern Memorial Hospital states that their experts currently estimate over five million American men are negatively affected by andropause and what is medically known as male hypogonadism when the testicles do not produce sufficient testosterone. Yet, many of these American experts also worry that many more men may be affected because men frequently ignore their symptoms without reporting them to their doctors.  “This is a highly prevalent disorder,” said Robert Brannigan, MD, a urologist at Northwestern Memorial Hospital in the same August 2010 press release. “Unfortunately, we estimate that 95 percent of cases are undiagnosed and therefore untreated. When ignored, symptoms can seriously disrupt one’s quality of life.”

Do keep in mind that testosterone and Low T is not just a guy thing – women too need adequate T to maintain sexual function, strengthen bones and muscles, boost mental clarity and libido, though women’s bodies make a lot less….

Another study, however, published in June 2010 in the New England Journal of Medicine and conducted by a team of researchers from English and European universities concluded that having the three sexual symptoms of "decreased frequency of morning erection, erectile dysfunction, and decreased frequency of sexual thoughts (sex drive)" were the only symptoms that actually turned out to be correlated with low testosterone levels.

That study which was the European Union-funded European Male Ageing Study had randomly sampled 3,369 men from ages 40 to 79 at eight European centers.  The lead author of the study, Dr Fred Wu, a professor at The University of Manchester's School of Biomedicine, and his colleagues therefore suggest that "unlike the female menopause which generally affects all women, the male menopause only affects about 2 percent of elderly men and is often associated with obesity and poor general health."

Fortunately, Canary Club offers convenient, easy to use, home hormone tests so don't wait if you suspect that you might be suffering from insufficient testosterone.  Put your mind to rest with our quick and simple test!

In addition, if it turns out you or a loved one do have low testosterone levels, be aware that the latest study refutes the claim that Testosterone Replacement Therapy (TRT) can increase or cause prostate cancer; a now-defunct idea that came out of studies in the '40s and the '80s.  Instead, Harvard Professor Dr. Abraham Mortgentaler showed in 2011 that testosterone levels above 120 ng/dl actually suppressed prostate cancer growth and that any appearance of growth in the original studies would only seem to be seen until sufficient saturation of testosterone occurred.

In summary, the jury is still out on the effect of andropause in men ― many of the suspected symptoms associated with andropause may simply be a natural part of aging or related to other causes and illnesses.  Therefore, a testosterone test may be the best and only way to determine if a deficiency exists.