Is Your Man Going Through Menopause? Find out!

While you’ve got your hot flashes, your man is going through his own menopause, called Andropause. Like women, men experience the so-called ‘change of life’ as a result of declining hormones, specifically low testosterone.

Andropause, however, is a more gradual process than the rollercoaster many women experience during menopause, with only a 1 percent annual decrease in testosterone, beginning at age 30. 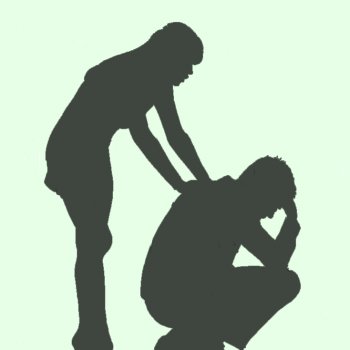 Gradually, around age 38-42, the testosterone gets to a low-enough level that even he notices something is "off." The rhythmic pulse he has known since puberty is faint or has vanished. He will often experience this time as a "loss of passion" and may be asking himself, "is this all there is?" Dissatisfaction and disappointment begin.

Occurring several years before the "mid-life crisis" this period is often tumultuous for committed relationships. Depending on his emotional maturity, his expression of this event runs the full spectrum — anywhere from "acting out" where extra-curricular wanderings are induced to relief the anxiety as his definition changes, to "acting in" by losing his interest in sex altogether and blaming you or his partner for the situation.

"There’s no question that testosterone is the hormone that puts the macho in male: that virility, hairiness, heavier bone and muscle mass, deeper voice and aggressive competitive drive we so dearly love in our man." Jed Diamond, author "Surviving Male Menopause," says in the book.

"Although Irritable Male Syndrome and Male Menopause can occur at any age, it is quite prevalent at mid-life. What is it about mid-life that causes men to become angry? Why do they take it out on the person they say they love the most? These are the kinds of questions I hear from women who are trying to understand what is going on in their relationship. If he can’t find his socks, he accuses me of misplacing them, just to piss him off. I’m not kidding—that’s what he tells me. What hurts the most is that he has withdrawn all affection. It’s like someone transformed him from Dr. Jekyll to Mr. Hyde. I want my husband back!

After one of our many blow-ups, she suggested, in her usual kind way, that maybe I was going through some kind of male change of life. I was insulted. It was bad enough that I had to go through her menopause, she wasn’t going to turn me into a she-male going through my own male menopause. No way!

I decided to explore the changes that men go through between the ages of 40 and 55 and prove to her that it was nothing like what women went through. Surely there was no such thing as “male menopause.” At first, my preconceptions were validated. Most doctors and health-care professionals were convinced that men might go through some kind of psychological or social mid-life crisis, but only women had hormonal changes. And of course, only women could have an end to their menstrual cycles since only women had menstrual cycles, to begin with."

Most men notice it, though they don't discuss it. The nature of men is to ignore it, it might go away. In this case, it does — it being the "pulse." It isn't readily identifiable due to a lack of discussion or accessibly written material.

Do you find yourself, or someone you care about, is becoming more irritable and angry? IMS can occur at any time in a man’s life, though it is most common between the ages of 14 and 25 when testosterone is on the rise and between 40 and 55 when it is declining.

The more common symptoms include hormonal fluctuations, biochemical changes, increasing stress, changes in the male role or self-image, hypersensitivity, anxiety, frustration, and anger. It can start out mild but can seriously increase. By age 45-50, testosterone can already be at deficiency levels of below 350 nanograms per deciliter (450-900 ng/dl are optimal), affecting both the physical and the mental health of even the manliest men.

And while we embrace the changes in our partners, we also want him to age with as much health and happiness as possible — right?

Andropause will present with symptoms of aging, when men in their 40s or early 50s may notice increased fat, reduced muscle, and loss of libido, along with a downward shift in energy. According to the Mayo Clinic:

are common symptoms, as the predominant male hormones, testosterone and DHEA, wane.

Testosterone is responsible for the normal growth and development of sex organs. Normal levels of testosterone contribute to energy, sexual function, mood, and libido.

The thyroid is a systemic hormone having a significant impact on overall health including metabolism, energy, well being, hair loss, immune system, memory, heart health, to name a few.

Human growth hormone (HGH) controls muscle and bone growth and lowers the amount of fat in the body. HGH is also known for its anti-aging properties and its ability to increase calcium retention, protein synthesis, and muscle mass.

DHEA is secreted by the adrenal gland and several studies suggest that DHEA has many therapeutic properties. DHEA gives support to the immune system, helping to prevent everything from the common cold to cancer, and it is a balance to cortisol which is secreted by the body when under stress and is highly destructive to body cells when present in excess. DHEA helps increase energy levels and reduces depression.

The loss of interest in sex, so closely tied with a man’s sense of self, leads many men into an unconscious mind spin or mid-life crisis, affecting every aspect of their lives.

We’ve all heard stores (or have experienced) men’s sudden life changes – physical, familial, and financial – made by male friends, neighbors and colleagues ‘of a certain age.’

“Andropause is a highly prevalent disorder,” said Robert Brannigan, MD, a urologist at Northwestern Memorial Hospital in the same August 2010 press release. “Unfortunately, we estimate that 95 percent of andropause cases are undiagnosed and therefore untreated. When ignored, symptoms can seriously disrupt one’s quality of life.”

Healthy testosterone and DHEA levels as andropause approaches help to maintain physical and mental health, including healthy erectile function and normal sex drive, as well as supporting the structural tissues, including skin, bone, and muscle, including the heart. Proper androgen levels also help prevent depression and mental fatigue, and therefore, the deficiency of these hormones has a significant impact on both physical and mental male health.

But what about estrogen? Isn’t this just for women? No!

Men with even slightly elevated estrogen levels double their risk of stroke and have far higher incidences of coronary artery disease. Early observations also reveal that men presenting with benign prostate enlargement or prostate cancer have higher blood estrogen levels. Insufficient estrogen, on the other hand, predisposes men to osteoporosis and bone fracture. The dramatic increase in mortality in men with unbalanced estrogen is nothing short of astounding.

Stress management, exercise, proper nutrition, dietary supplements, and androgen replacement therapy have all been shown to raise androgen levels in men and help counter male metabolic syndrome symptoms and treat andropause. The trick is to know how much testosterone is required for each individual male. This is where knowing the salivary testosterone levels come into play.

Play it safe: Why take chances with the life of your favorite man and your family. His Advanced Plus Profile can identify and monitor for:

The best Father’s Day or any day present?

Is it another tie or tickets to a ball game — or something that could forever change the health and the happiness of your favorite man? With simple in-home testing, you can help him maintain or improve his mental health and his physical prowess.